Rose Namajunas went from the top of the fight game to seemingly retired in the span of a single Jessica Andrade slam. Now, six months after that slam knockout loss cost her the UFC strawweight championship, Namajunas claims she has regained her passion for fighting and plans to fight again.

Rekindling her passion to fight took a trip to Minnesota to get in touch with her fighting roots, Namajunas said. She took the trip in the months following the brutal loss to Andrade.

“I’ll fight again,” Namajunas said during an appearance on Ariel Helwani’s MMA Show. “It’s kind of one of those things where you get a little emotional. But it’s just like I lost the passion for martial arts and fighting — mainly for fighting. But I found my passion again. I went mack to Minnesota to see one of my former coaches from earlier on in my amateur career, Greg Nelson. He’s just an inspiration for me. Sorry, I’m getting all teared up right now. It’s been tough.”

“I lost the passion for martial arts and fighting, mainly for fighting, but I found my passion again.”@rosenamajunas discusses her emotional journey after losing the strawweight title (via @arielhelwani) 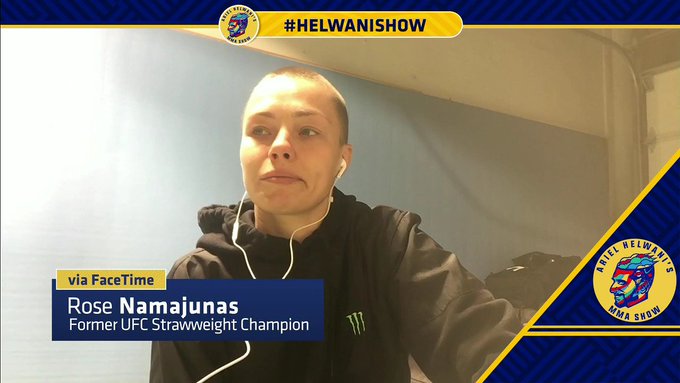 97 people are talking about this

Namajunas (8-4) pulled off a stunning knockout upset of longtime strawweight champ Joanna Jędrzejczyk at UFC 217 in November 2017. She proved the win was no fluke when she outworked Jedrzejczyk over five rounds in their UFC 223 rematch the following April. Then came Andrade and one of the most violent moments in Octagon history. After the loss, Namajunas said she was having trouble “having fun” with the fight game and “I just want to do something else with my life right now.” She didn’t rule out retirement, but never explicitly said she’d hung up her gloves for good.

“Like, I think the reason I wanted to retire is this isn’t a job where you can go in half assed and not be fully passionate about what you’re doing,” Namajuas told Helwani. “There’s been times I’ve not been totally confident in myself going into a fight and I pull it off or get through it or just push through it and then with injuries or being sick. This last time was extra scary because of what could have happened to me just pushing through something when you’re not 100 percent. I think that’s why.

“Because I wasn’t sure if I was really 100 percent into it. Of course, fighting is all I know, it’s what I’ve been doing since I was a little kid. So it’s hard to think of doing anything else. At the same time, I don’t know, I just lost the passion for martial arts. I think I found it again just going back to Minnesota to reconnect with somebody like Greg Nelson who is like, the most realest martial artist in the game and just getting that passion reignited.”