MIAMI — Joel Embiid was the best player on the court in Philly’s 117-116 overtime loss to the Heat on Saturday night. He finished with 35 points and 11 rebounds on 11-of-16 shooting, including 2-of-4 from 3-point range and 11-of-12 from the free-throw line. He was dominant defensively, making life miserable on budding Heat star Bam Adebayo. He also made the biggest mistake of the game, and it wound up rendering all that other stuff moot.

After securing a tap-out rebound, Embiid had possession of the ball with 17 seconds to play and the Sixers leading 106-104. He was surrounded by three long defenders in Tyler Herro, Derrick Jones. Jr. and Jimmy Butler. He had a pair of teammates — Tobias Harris and Trey Burke, both of whom shoot just shy of 80 percent from the free-throw line — wide open and in clear sight one pass away.

There’s a pretty simple alternate ending to this game. Embiid passes to Harris or Burke, more time runs off the clock before the Heat are eventually able to foul, the Sixers make a couple of free throws and the game is likely over. But that’s not what happened. Instead, Embiid, caught in a car wash of long slapping limbs, inexplicably held on to the ball, and Butler eventually poked it away from behind, which led to a Tyler Herro go-ahead 3-pointer on the other end to put Miami up one with 6.9 seconds to play.

Philadelphia was able to get the game into overtime on a miraculous Ben Simmonsput-back off a Josh Richardson missed free throw with under a second to play, but it never should’ve gotten to that point. Embiid has to pass that ball. If he does, even if the Sixers had only made one of the two free throws, a three-point lead, and very likely a four-point lead, with 15 seconds remaining represents a high win probability.

“There were lots of people open,” Sixers coach Brett Brown said of the play. “I thought [Embiid] was going to just throw the ball. It is like time stood still. I kept expecting him to go find an open player. He didn’t, and they got a piece of the ball and made a tough 3-pointer at the end.”

As for Embiid, he said he was “expecting them to foul me” and that he “didn’t want to make a pass that would lead to a turnover.” So many of Philly’s issues are wrapped up in this play. Every bit of offense they create, particularly late in games, is hard, and they only make it harder on themselves with inopportune turnovers and bad decision making.

The fact is, it was Tobias Harris who made the initial mental mistake, but that won’t get talked about. Up by two with the ball with 19 seconds to play is not the time to try to dunk on two guys. Watch the play again. All Harris has to do is pull the ball out and force Miami to foul him. Go to the line, make a couple of free throws and go home with a win.

Still, one mistake is one thing. To get a second chance to do the right thing when the ball ends up back in Embiid’s hands, and commit yet another error, that’s a problem for a team that expects to be competing for a championship come May and June — when games, and series, are so often decided in those final white-knuckle minutes that have continually plagued these Sixers.

In clutch situations, which are defined as games that are within five points with five minutes or fewer to play, the Sixers are turning the ball over on 17 percent of their possessions, per NBA.com, which is the fourth-worst mark in the league. In total, the Sixers are averaging 4.2 fourth-quarter turnovers per game, which is the sixth-worst mark in the league.

There are layers to this. In fourth quarters, the Sixers grind down to the sixth-slowest pace in the league. This is another symbolic struggle, as the Sixers are generally caught between a team that needs to play fast for Simmons and slow for Embiid.

This issue is magnified in crunch time, when the Sixers bog down in the halfcourt, where they have suspect ball-handlers in tight quarters and terrible spacing because Simmons can’t, or won’t, shoot. And even the guys who are decent shooters according to percentages — Al Horford, Richardson, Harris, and even Embiid — aren’t terribly threatening. It makes for mucky, tightly packed possessions, which breed turnovers.

Here’s Josh Richardson in a tie game with less than a minute to play in overtime. Kind of a crucial possession, and the Sixers have nowhere to go beyond a basic ball screen that creates no space and Richardson ends up stuck.

Below is another overtime possession that went wrong. Before you hit play on the video, prepare to watch what’s going on away from the ball. This is 24 seconds of the Sixers going nowhere. It’s two guys passing it back and forth 26 feet from the basket while two others guys — Simmons and Harris — stand like statues on the baseline. There is no movement. No spacing. Just heavy dribbling against tight on-ball defense because they don’t have anywhere else to go for offense.

In the end, it’s Embiid, a heavy-footed seven-footer, trying to create one on one off the dribble, having to resort to trying to throw a pass to himself off the backboard with one second on the shot clock. It didn’t work.

Even when the Sixers are making shots, it’s somewhat deceiving. Just look at Saturday night’s fourth quarter, in which Philly shot 57 percent from the field. If you just looked at the box score, you’d think they were running an efficient offense that led to high-quality looks, but in fact, they were just making a lot of really tough shots.

Here’s Trey Burke — after some 15 seconds of playing a two-man game with Al Horford, while the other three Sixers stood around, generated nothing — hitting a baseline jumper basically falling out of bounds.

Here’s Embiid, after another full shot clock of dribbling around has produced nothing for the Sixers, having to create a James Harden step-back 3-pointer off the dribble with the shot clock ticking down. 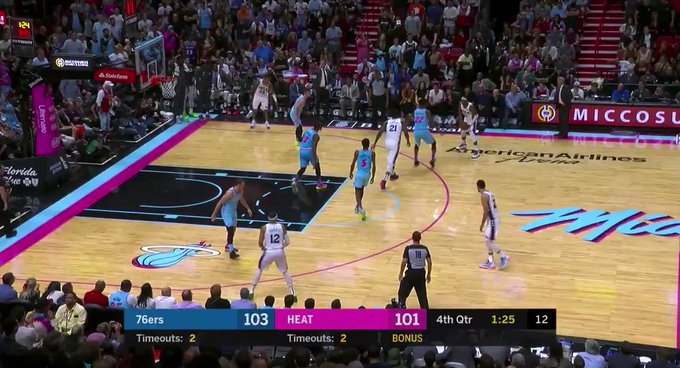 33 people are talking about this

As the text in the tweet mentions, Embiid is a capable 3-point shooter. Whether his taking 3-pointers — even when he makes them — is more beneficial to the Sixers or their opponents is a whole other conversation, but he is capable of making them. That doesn’t mean it’s a good shot, or in any way a sustainable form of late-game offense. These shots can, and do go in on occasion, but over the long haul, this sort of tough half-court sledding, combined with all the turnovers, is the reason the Sixers have the 24th-ranked fourth-quarter offense in the league.

None of this is to say the Sixers are doomed. They’ve become everyone’s favorite team to nitpick, which is largely an extension of the polarizing issue of Simmons’ non-shooting — but they are so supremely talented, if ill-fitting, and so capable of winning games on their defense alone, that to think they aren’t a legit Finals contender regardless of how the regular season plays out would be a mistake.

Still, there’s no denying Simmons, for all his greatness, makes things hard on the Sixers. But they do a lot of things to make it even harder on themselves, and that’s the stuff they can control. Simmons isn’t just going to turn into a shooter a few months from now, and he’s not going to get benched. The Sixers have to control what they can control, and it starts with better decision making and taking care of the ball in the stretches of games that matter the most.