(CNN)Some of the world’s biggest soccer clubs will travel to China in 2021 after the country was announced as host of the first expanded edition of the Club World Cup.

The competition, which currently features seven teams — the winner from each confederation’s major continental tournament — will be expanded to 24 teams for the first time.

“It is a historic decision for football,” FIFA President Gianni Infantino said, speaking at a FIFA council meeting in Shanghai. “The new [tournament] will be a competition which anyone who loves football is looking forward to. It is the first real and true Club World Cup where the best clubs will compete.

“It will allow us to generate significant revenues but I want to underline this, very, very clearly … FIFA will have zero out of this because we will reinvest this in football.” 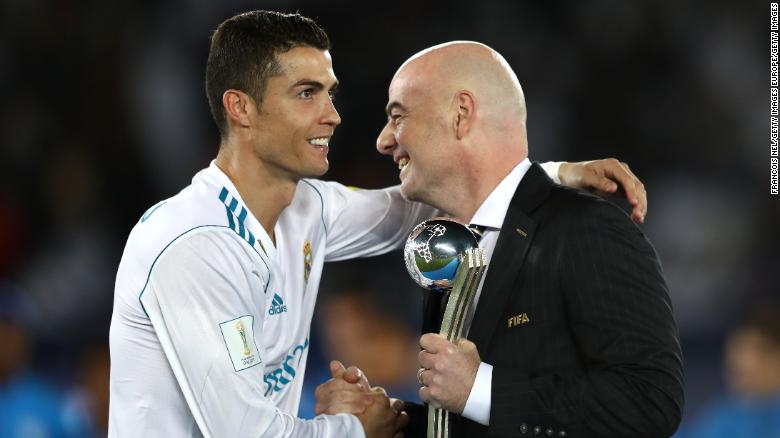 Qatar will host the remaining two editions of the tournament’s current format, with the 2019 competition getting under way on December 11.

The new format will begin in June 2021 and the competition will run every four years from June to July, taking the place on the FIFA calendar currently occupied by the Confederations Cup, which is also being scrapped.

It is expected to feature eight European teams, six from South America, three from each of Africa, Asia and North and Central America and one from Oceania.

Infantino confirmed that China, which has made football a national priority under President Xi Jinping, had been the only candidate.

When the expanded format was approved at a FIFA Council meeting in Miami in March, several top European clubs indicated they intended to boycott the competition.

In a letter sent to Infantino and signed by 15 members, including Juventus, Manchester United, Barcelona and Ajax, the European Club Association (ECA) said it was “firmly against any approval of a revised Club World Cup at this point in time and confirm that no ECA clubs would take part to such a competition.”

Following Thursday’s announcement, Amnesty International UK said that hosting the event must not provide China with the opportunity to “sportswash” its reputation.

“China has an atrocious human rights record and FIFA must use its considerable influence to push for human rights improvements in the country,” Allan Hogarth, Amnesty International UK’s Head of Policy and Government Affairs, said in a statement.

“China being chosen to host the FIFA Club World Cup in 2021 presents Beijing with yet another opportunity to try to ‘sportswash’ its tarnished international reputation.

“It’s likely the Chinese authorities will see the competition as an opportunity to project an image of openness and toleration, whereas the much darker reality in the country is one of pervasive censorship, relentless round-ups of dissidents, and the shocking mass detention of Uyghurs in Xinjiang.”

Earlier this month, a drone video appearing to show hundreds of blindfolded men being led from a train in China has raised new concerns over the ongoing crackdown on Muslim Uyghurs in the far western region of Xinjiang.

CNN cannot independently verify the authenticity of this video or the date it was shot. Chinese Foreign Ministry officials did not respond to repeated requests for comment on the video.

“Any club involved in a China-hosted Club World Cup — from players through to coaches and backroom staff — should be ready to speak out on human rights issues in China,” Hogarth added.