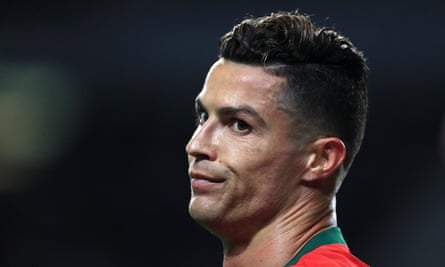 Cristiano Ronaldo has tested positive for coronavirus and has withdrawn from the Portugal squad to face Sweden in the Nations League on Wednesday. Photograph: Mike Egerton/PA

The Juventus forward Cristiano Ronaldo has tested positive for coronavirus, the Portuguese Football Federation has confirmed.

The 35-year-old is said to be “doing well, without symptoms, and in isolation”, with no further positive tests reported in the squad before Portugal’s Nations League match against Sweden on Wednesday.

The PFF confirmed in a statement: “Following the positive case, the remaining players underwent new tests this Tuesday morning, all with a negative result, and are available to Fernando Santos for training this afternoon, in Cidade do Futebol.”

Ronaldo had played in both of Portugal’s matches so far during the international break. The former Manchester United and Real Madrid forward started against Spain in Lisbon, coming off late on during the second half of the goalless draw, and then played all of the Nations League A3 fixture against France in Saint-Denis on Sunday. He had scored in each of his Serie A appearances this season, including two goals in the 2-2 draw against Roma on 27 September.

Earlier this month Napoli failed to show up for a match at Juventus after their local health authority ordered players to stay at home following positive Covid-19 results returned by the club’s Piotr Zielinski and Elif Elmas. Despite facing the prospect of a 3-0 walkover victory being awarded by Serie A to Juve, legal representatives of Napoli said they would resist this outcome.

In the runup to that scheduled fixture, two non-playing or coaching staff members at Juventus went into isolation after testing positive. Those affected were outside the playing, technical and medical staff, who were all able to work in isolation after the results became known.